Today was a great day for NJ FOP!!! You may recall that one of our Camden County Metro brothers was shot in the line of duty on November 1, 2017 in the City of Camden. Officer Patrick O’Hanlon survived that shooting and was able to disarm and subdue assailant, 19-year Delronn Mahan of Lindenwold. Officer O’Hanlon was discharged from Cooper University Hospital on Saturday. 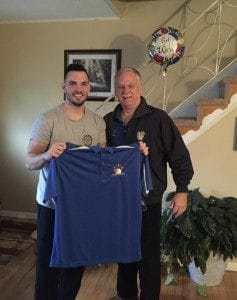 Today NJ FOP President Robert Fox and NJ FOP Chaplain Kevin Karcher visited Officer O’Hanlon at his home and presented him with an FOP State Lodge shirt. President Fox gave Governor-elect Phil Murphy a heads-up that he would be visiting the recovering officer. Much to their surprise, Governor-elect Murphy called President Fox’s cell phone during that visit and gave words of encouragement directly to Officer O’Hanlon.

We endorsed Governor-elect Murphy because we believed he’d be there when called. Today was a good start…we believe he will have our backs.