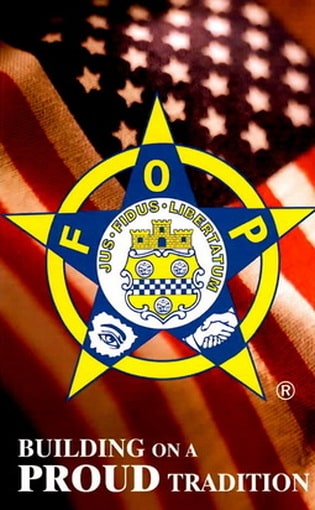 The Voice of Law Enforcement Professionals The Fraternal Order of Police is the world’s largest organization of sworn law enforcement officers. We have 345,000 and growing members in more than 2200 local lodges. We are the voice of those who dedicate their lives to protecting and serving our communities. We are committed to improving the working conditions of law enforcement officers and the safety of those we serve through education, legislation, information, community involvement, and employee representation. No one knows the dangers and the difficulties faced by today’s police officers better than another officer, and no one knows police officers better than the FOP. Founded in 1915, we are still “Building on a Proud Tradition.” What is the FOP? The Fraternal Order of Police is comprised of active and retired law enforcement officers of all ranks from all branches of government. Federal, State, County, and Local. members work side by side to improve the profession and serve the public. At all levels, Local, State, and National, the FOP provides members with professional legal defense, a powerful collective bargaining voice, advocacy for law enforcement legislation, and seminars for professional development. FOP members strongly believe in community involvement, and support such organizations as Easter Seals, Special Olympics, and in New Jersey, the Deborah Heart & Lung Center. The FOP also provides members with opportunities to meet fellow officers away from the job, to encourage friendships and networking. Through its many services and activities the FOP is a family that helps members’ in good times and in bad. 345,000 & Growing! The National FOP was founded in 1915 and has since become the Nation’s largest law enforcement organization with more than 345,000 members. New Jersey’s first local lodge, Camden FOP Lodge #1, was formed in 1947. The New Jersey State Lodge was formed in 1948, and currently ranks as the 7th largest State Lodge with more than 16,000 individual members Core Principles From humble beginnings, the FOP grew to become the preeminent police organization in the country. It accomplished this by placing the utmost importance on these core principles:

History of the FOP In 1915, times were bleak, police officers worked 12-hour shifts, 365 days a year. There were no police unions to fight for the better working conditions, wages and benefits. Martin Toole and Delbert Nagle, two Pittsburgh Police Officers had enough of the horrendous working conditions. Together with 21 other police officers they formed Fort Pitt Lodge #1, Fraternal Order of Police and held their first meeting on May 14, 1915. From those humble beginnings, the Fraternal Order of Police has grown into the largest professional police organization in the United States with over 345,000 members. We have carried on the tradition started back in 1915, committed to improving the working conditions of Law Enforcement officers. The FOP remains the #1 voice for Law Enforcement in Washington and around the country. The New Jersey State Lodge is committed to continuing this proud history of service to its members and the public, here in the great state of New Jersey.