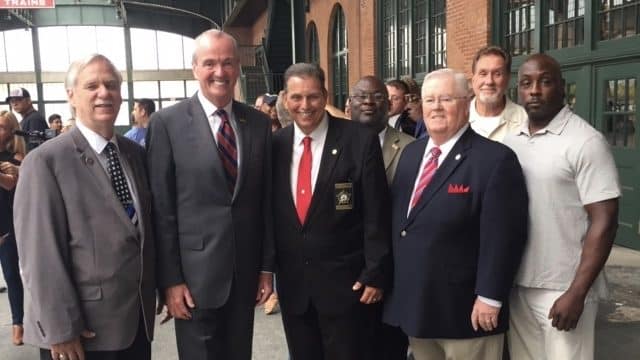 NJFOP President Robert W. Fox said, “It was a great day for the NJFOP and the PFANJ to see our Governor, State Legislators, and First Responders Unions, including the State Lodge Fraternal Order of Police, celebrating a well-deserved benefit being given to the men and women who make the ultimate sacrifice in dire emergencies protecting the citizens of this State and Nation.

Thanks to Assemblywoman Annette Quijano and Senator Linda Greenstein for sponsoring the Thomas P. Canzanella 21st Century First Responders Protection Act.  Also, thanks to PFANJ Dom Marino and NJFOP lobbyist Pete Guzzo for their hard work! No thanks to former Governor Chris Christie who vetoed and killed this bill not once…but twice.

Today, Governor Phil Murphy closed the deal and signed this bill into law. This legislation was championed by the late PFANJ President Thomas Canzanella with the help of former NJFOP President Ed Brannigan.  Brannigan delivered a very moving speech at the ceremony and NJFOP Executive VP Bob Gries led the Pledge of Allegiance.