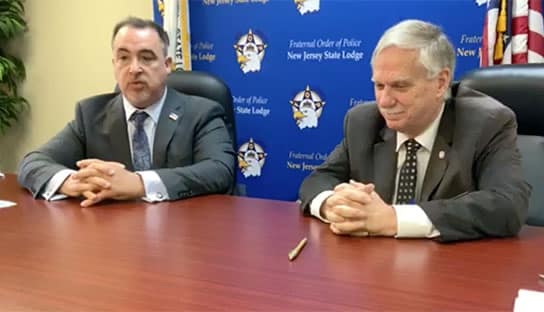 On Monday, May 11, 2020, the Federal Law Enforcement Officers Association (FLEOA)President Larry Cosme and the New Jersey State Lodge of the Fraternal Order of Police President Robert W. Fox met at the NJFOP Trenton headquarters to announce that they jointly filed a lawsuit against the State of New Jersey for violating qualified active and retired law enforcement officers rights under the Law Enforcement Officers Safety Act (LEOSA).  New Jersey has repeatedly denigrated the federal rights of qualified retired law enforcement officers via establishing a state patchwork of laws that ignore the clear language and rights outline in LEOSA.

President Fox noted, “When an officer takes his or her oath to protect and serve their community, it does not end when the badge comes off and an officer retires. The Law Enforcement Officers Safety Act (LEOSA) acknowledges this fact and provides qualified, former law enforcement with the opportunity to continue serving the public after their retirement if they feel compelled.  When Congress passed LEOSA with wide bipartisan support, they accepted that there are no better trained individuals to respond to a threat than qualified retired law enforcement officers.”  Fox continued, “After almost two decades, I am happy that the NJFOP and FLEOA have joined forces in bringing a joint lawsuit against the State of New Jersey pertaining to LEOSA.”

FLEOA President Larry Cosme said, “In the State of New Jersey, we see that criminals at times have easier access to firearms than qualified retired law enforcement officers.  The intent of LEOSA was to bring a force multiplier of qualified retired law enforcement officers onto the streets of America, so criminals would think twice before acting.  By adding their own regulatory scheme that violates the clear language of LEOSA and making it almost impossible in some cases for an officer to carry their authorized firearm, the State of New Jersey continues to make the public less safe for its residents, who already impacted by the violent crime statistics in some of its major cities.”

Both FLEOA and NJFOP leadership strongly believes this is not a matter of states’ rights or gun rights; it is a matter of public safety.